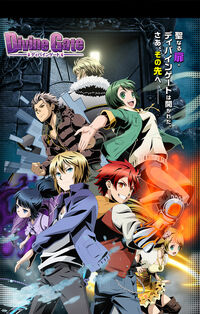 Divine Gate is a 2016 anime series directed by Noriyuki Abe and animated by Studio Pierrot. It follows the "urban legend" of the Divine Gate, which ushered an era of chaos where desires and conflict intersect. To restore order, the World Council was formed. As peace is restored, the World Council gathers boys and girls deemed fit to reach the gate for their personal objectives. Those who reach the gate can remake the world.

The first episodes will be aired on MX, KBS, SUN, TVQ, TSC, TVA, and BS11 starting on January 8, 2016 onwards. Episodes will be later made available for streaming on Docomo Anime Store, Anime Hodai, Nico Nico Douga, Rakuten SHOWTIME, U-NEXT, J:COM and Video Pass after broadcast.[1] Funimation will stream in Japanese with English subtitles, as well as with English audio.[2]

Retrieved from "https://dg-anime.fandom.com/wiki/Episode_Guide?oldid=1448"
Community content is available under CC-BY-SA unless otherwise noted.