"There is no stopping to his pouring sins. Faintly, softly, the falling rain- even if it fills the holes and depression on the streets, it could not fill the empty hole in his heart. Even if the droplets of rain dripping from his cheeks penetrates his heart and was able to create ripples, it would not become tears."

Aoto is one of the three main protagonists of the Anime series Divine Gate alongside Akane and Midori. He is the first character to be introduced in the series.

Long blonde hair with blues. He is always seen wearing a blue denim jacket with v-neck t-shirt. He also wears a key-shaped necklace. He has the same height as Akane. 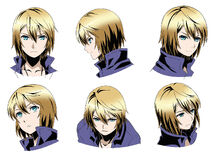 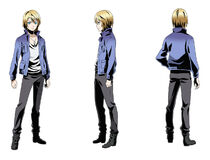 Add a photo to this gallery

Quiet and reserved individual. He often has a habit of isolating himself from other people, choosing to be alone due to strict upbringing. He rarely shows any expression.

When he was younger, Aoto's depression kept getting worse due to his parent's neglecting him, as in excluding him from family activities. (Even excluding him from his own birthday party). As days continue, he loses all his emotions except guilt and sad due to constant neglected and physical abuse by his parents. Even though his parents mistreated him, he still loves his mother for still caring and checking up on him whenever he is asleep.

As the series progress, he learns to value his life and able to trust people more with the help of his new friends.

Aoto lived a miserable childhood with his younger twin brother Ariton due to his parents treating them harshly to make them turn into transfers in order to join the World Council. Aoto remained calm and kept those feelings locked inside him. Until one day, Ariton killed both his parents and ran away, leaving Aoto as the only survivor. Fearing for his brother, Aoto decided to shoulder the death of his parents, and took all of the blame on him, earning him the nickname: The Parent Killer. He is also a suspect of the "Blue Christmas" massacre, which ended with 666 casualties.

Prior to his brother's departure, Aoto was capable of seeing The Divine Gate, indicating that he became a transferer. He was later discovered by Arthur, the leader of the higher council, who gave him his Driver, Wadatsumi, and encouraged Aoto to join him for the trip of finding The Divine Gate. Wanting to see his brother again and know the truth about the night of their parents' death, Aoto decides to join Arthur, Akane, Midori and the others to enter The Divine Gate to have his wish come true.

Destructive Ability: City Level (Should be comparable to both Akane and Midori, who destroyed a robot who took down an entire city in mere seconds, Can trade blows with Loki's Auto Drivers), potentially Universe Level+ (Deflected the attacks of the Skandavian Gods alongside Akane and Midori)

Speed: Massively Hypersonic+ (Mach 8810, Fast enough to dodge lightning at point blank range), potentially Massively FTL+ (Was fast enough to escape the attacks of the Skandavian Gods upon his first encounter with them)

Stamina: Extremely High, Can fight after having life-threatening injuries

Intelligence: He is a skilled swordsman and extremely skilled at finding weak spots of his opponents and is shown to be pragmatic enough to take down buildings if that is required to defeat his target.

Aoto: "It makes sense. Most wishes in life don't come true. I know that. It's why I spent most of my life trying not to care. But then, Arthur changed my mind. He said that caring for other people is what makes us human. That nurturing friends or ideals or causes is what makes us better. I have changed since meeting my comrades, I'm stronger. So you know what I think about the gate? Caring for this world is what's important. Way more so than getting my perfect reality."

Aoto: "We can't rely on god like powers to save people. The only way to change humanity is for us to go change it."

Retrieved from "https://dg-anime.fandom.com/wiki/Aoto?oldid=1770"
Community content is available under CC-BY-SA unless otherwise noted.